Tell me more about Adult Circumcision 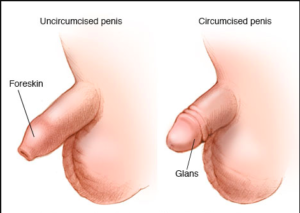 Circumcision is an operation to remove the skin that covers the head of a man’s penis. It is one of the oldest surgical operations in history, and is often performed on infant boys for religious, social, medical, and cultural reasons. About 8 in 10 males in the United States are circumcised.

Some men who were not circumcised as an infant may be interested in being circumcised later, as an adult. 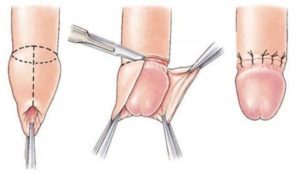 Circumcision in adults is a relatively simple procedure in which a doctor cuts the skin surrounding the head of the penis—called the foreskin. The doctor then pulls the foreskin back and trims it off, uncovering the head of the penis. The edges from the trimmed foreskin either will be cauterized or stitched with dissolvable stitches. The procedure in adults usually occurs under anesthesia (either local or general) and takes about 1 hour to complete.

Usually, men can go home the same day that they have the circumcision procedure. Recovery from the procedure is done at home and can take about 2-3 weeks. The recovery process is not very painful. For most men, there is some minor pain for the first few days. Over-the-counter pain relievers are enough for this time. Within a few days of the procedure, pain usually goes away naturally. Soreness, redness, or a bruised look are common after the procedure, and some small amounts of yellow fluid at the top of the penis may be present. The penis may be swollen after the procedure, but swelling should go down in about 2 weeks. Some men wear a bandage or dressing over their penis after the procedure, and doctors recommend wearing underwear that holds the penis upright for a few weeks to help the swelling go down. A doctor may recommend avoiding sex or masturbation for several weeks after the operation—usually up to 6 weeks.

There are many reasons that men choose to be circumcised as an adult. Circumcision makes personal hygiene easier: it becomes easier to wash the penis and avoid bacteria or other germs. Circumcision also has been shown to reduce the risk of getting HIV or other sexually transmitted infections like syphilis or herpes. Even with the risk reduction, safe sexual practices like wearing condoms remain important. Additionally, circumcision reduces the risk of urinary tract infections (UTIs) and penile cancer. Finally, circumcision can prevent penile problems like phimosis, in which the foreskin of an uncircumcised penis can get stuck and be difficult or impossible to retract, leading to inflammation of the penis.

For some, such as those with phimosis or penis infections, circumcision as an adult may be medically necessary. For others, this procedure may be considered elective, but can help with one’s lifestyle.

Some men worry that getting circumcised will affect their sex life or ability to have kids. Circumcision is not known to affect sexual pleasure for the man or his partner(s), and it does not affect fertility or the ability to cause pregnancy.

It is helpful for men to discuss the possibility of adult circumcision with a doctor. If you are considering circumcision, contact us today to schedule an appointment with the best urologist doctor in NYC.